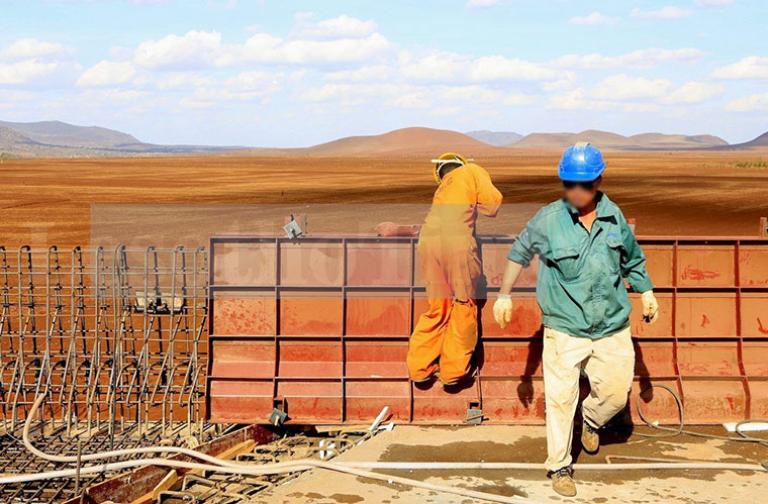 Allege systematic bias in the awarding of construction tenders to Chinese companies:
“We are being colonised by the Chinese”, says PAC chairperson Selibe Mochoboroane

LOCAL contractors have ganged up to fight what they describe as the “glaring bias” which has seen major government construction tenders being awarded to Chinese companies.

The two companies allege that Chinese companies were being unfairly and unprocedurally given work even in instances where local companies had demonstrated that they were better placed to undertake the work. On his part, Mr Mochoboroane has warned that Lesotho could soon find itself a colony if Chinese companies are allowed to dominate the country’s economy.

Sigma Construction and LSP Construction are not the only firms who are up in arms with the government over the award of tenders to Chinese companies.

On the same day they wrote to Mr Mochoboroane, the Consortium of Lesotho Contractors (CLC), an association of 32 Basotho-owned construction companies also penned a similar letter.

So serious are the local contractors’ concerns that the CLC felt compelled to take their grievances to the ministers of public works and transport; local government; trade and industry as well the principal secretaries of the three ministries.

“I write to draw your attention Mr Chairman (Mochoboroane) and members of your (PAC) committee to an emergent practice whereby, consistently, a certain category of foreign construction companies, (sic) of common nationality are awarded construction projects to what has now progressively become the exclusion of Basotho companies and indeed also other companies falling outside of that seemingly select group,” wrote Mokhele Likate on behalf of the CLC board of directors.

“The disproportionate award (of tenders)…seems to compromise the core values of integrity, transparency, fairness, accountability, service ethics, empowering of local employees and stakeholders.

“The thriving trend of awarding construction projects to non-local companies can only but cripple the ailing economy of the country and add to Basotho’s misery of poverty and unemployment.

“This has to be discouraged by all means and we believe that your good office (PAC) can play a big role in significantly reducing this practice and paving the way for corrective measures to be implemented.”

At the heart of the CLC complaints are the awards of tenders to Chinese companies even for relatively simple tasks such as the construction of access roads.

CLC states its dissatisfaction with the government’s decision to award the tender for access roads in Mohalalitoe in Maseru and others in Maputsoe, factory shells and related infrastructure at Ha Belo in Butha-Buthe to the Chinese company, Unik Construction.

“It is our opinion that there has been excessive and inexplicable awards by the state and parastatals of contracts to Chinese construction companies. We herewith urgently request your good office to investigate this situation,” the two companies wrote to the PAC chairperson.

“Chinese contractors employ very little, if any local skilled labour. The great majority of management, professionals, artisans and operators are all Chinese citizens.

“Chinese contractors invest very little, if anything in Lesotho. They import as much as possible from China and do not stimulate or add anything of great significance to the local economy.

“Both Sigma and LSP have invested heavily in the local economy, including in the retail, commercial and residential property markets in addition to their sustained contribution to the development and employment opportunities in the construction and allied industries over many years.”

The two companies questioned the ‘unprocedural’ award of another project to build Maputsoe Road to China Geo whose bid of M215 million was M45 million more than that of the lowest bidder, EXR which had submitted a bid of M170 million.

The two companies also complain that they had initially been recommended for the M750 million Water and Sewage Company (WASCO) tender for the construction of water supply infrastructure for Butha-Buthe and Hlotse before that was reversed. Unik, China Geo and Mango Tree were subsequently recommended in place of Sigma and LSP.

“We were informed on good authority that Sigma and LSP were recommended for the award by the tender evaluation panel. WASCO however, changed the recommendation and appointed Unik, China Geo and Mango Tree, who are all Chinese companies.

“It should be noted that the consultants for this project consist of a joint venture between Mot MacDonald and Ground Water Consultant (GWC). There appears to be a trend throughout where GWC is the consultant and Unik being awarded the project. The relationship between GWC and Unik needs to be investigated. One wonders how many contracts have been awarded to Unik where GWC was the consultant.”

Also of concern to Sigma and LSP is the fact that some projects have been awarded to Unik and other Chinese companies without open tenders. Examples include the WASCO pipeline from the Police Training College to Khali Hotel in Maseru which was allegedly awarded to Unik without going to tender and the refurbishment of the Moshoeshoe I International Airport which has been reserved for one of three Chinese companies.

Yesterday, the LSP management told this publication that the media was “not the best platform to address their concerns”.

“We at LSP note all the stories that have been written in the media about us and our relationship with the government pertaining to the issue of tenders. We would like to set the record straight and say that the letter we wrote was private correspondence among ourselves and the government and we do not know who leaked it to you and to what end.

“We however, must state categorically that we work and cooperate with the government of the day and we communicate directly whenever there are any issues we feel should be brought to the attention of the government. We do not and we will not communicate through the media.

“Lesotho is at interesting and exciting period in its history where it is poised for economic development. This opens up the space for infrastructure development and as LSP we intend to play our part as a local company in contributing to the overall development of our country,” LSP said.

For his part, Mr Mochoboroane acknowledged receipt of the letters and said even though the PAC was still to meet, there was merit in the local contractors’ grievances.

Mr Mochoboroane said that Lesotho could not be regarded as an independent country if 90 percent of the economy was controlled by foreigners.

“Even though the PAC has not sat down to discuss the contractors’ grievances, as we are currently on a break, it is quite clear that the Chinese are taking the majority of business opportunities in the country even in other areas outside construction,” Mr Mochoboroane said.

“It seems there is a lot of corruption in awarding the Chinese companies tenders. As PAC we also need to interrogate how many Chinese have work permits and how they got them.

“For the fact that most developments are funded by their (Chinese) government’s loans, it does not mean the construction should be done on their terms. The Lesotho government is going to pay back those loans and that should give it the authority to select the contractors of its choice.

“It would be understandable if the Chinese were bringing in the expertise that Basotho don’t have. But they import labour and equipment, leaving Basotho with little to gain. The government often argues that Basotho construction work is mediocre but we do not see any transfer of skills to improve those of Basotho.

“Foreign investment should constitute 20 percent of the economy but we see the Chinese controlling our economy. If we have not yet realised it, we are being colonised. We may only realise that when it may be too late,” Mr Mochoboroane added