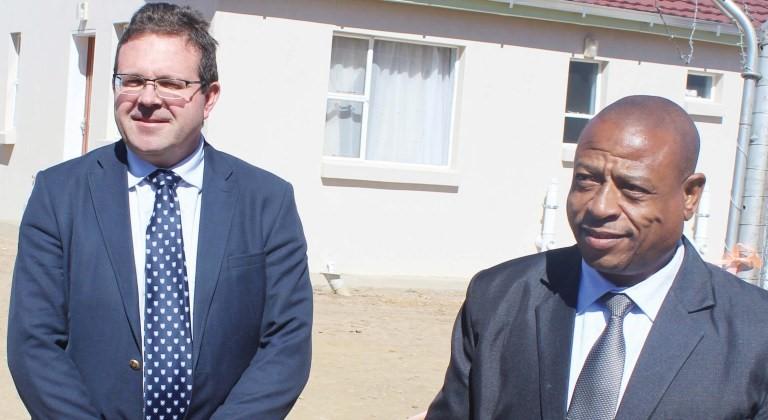 Meta information for the article:

MOHALE’S Hoek — The Ha Moletsane community in the district of Mohale’s Hoek can finally heave a collective sigh of relief after years of struggling to access health services.

This follows the recent construction and opening of the Khalane ‘Mamokhele Health Post, courtesy of the Bothma and Malie families who hail from the area.

The health facility was officially opened during a recent ceremony that was attended by Health Minister, Nyapane Kaya. The wealthy Bothma and Malie families are originally from Ha Moletsane village and the gesture is part of their initiatives of giving back to the community.

The centre will be managed by the Ministry of Health who will provide the staff and supplies.

The Malie family donated the house which the Bothma family renovated and converted into a clinic. LSP Construction will fund the employment of two nurses and the cost of the electricity.

Villagers told the Lesotho Times that they would no longer incur transport costs of ferrying patients to and from far off medical facilities at Mofumahali oa Rosari Clinic, Mafeteng or Mohale’s Hoek district hospitals.

“It was difficult for us whenever we had a medical emergency because we had to hire a vehicle to take patients to the nearest health centre which is Mofumahali Oa Rosari clinic,” 68-year old ‘MaPaulinah Ramonakali said.

“Sometimes you do not even have the money to hire a vehicle and the condition of the patient may deteriorate leading to loss of life or permanent damage.

“But now with this clinic nearby, we can even use a wheelbarrow to ferry the patient to the facility,” chipped in another villager ‘Manthabiseng Tabane (76).

‘MaEvodia Moletsane (56), a village health worker in the area, said pregnant mothers were among groups that were in dire need of medical services that were closer to home since they could go into labour at any time.

“This clinic will help expecting women because they must make regular clinic visits and they will not have to travel great distances in their condition,” she said.

As a village health worker, Ms Moletsane said the advent of the clinic would also reduce her work burden in caring for the sick.

“In the absence of a health centre in the region, we as village health workers are expected to take care of the sick and administer first aid treatment while having to organise transport to ferry patients to the nearest health centre.

“Sometimes I had to use my own money to get patients to health centres. So, the arrival of the clinic is also going to help us a great deal,” she added.

Speaking at the handover ceremony, Andre Bothma, who is also the Managing Director of LSP Construction, said the idea of opening a clinic was inspired by the plight of the elderly with regards access to health services.

The Bothma family moved to Ha Moletsane in September 1941 and the family currently runs a feeding scheme for the elderly where villagers get one meal every day.

“We noted that the elderly had a difficulty of getting to the nearest clinic at Mofumahali oa Rosari and we saw this as an opportunity to create an out-post clinic.

“Mme Mary Moleko nee’ Makhamathoane Malie, the eldest sister of Ntate Mpho Malie, generously, donated the property to be utilised as a clinic and our families decided to develop this clinic,” Mr Bothma said, adding that water would also be availed to the clinic and villagers.

The village is one of the areas affected by the previous drought and people have to travel long distances to draw water using animals or vehicles.

There was also no electricity supply in the area before the intervention by the two families. The water component has been funded by Tom and Lauren Jacobs and LSP Construction.

“Lauren, a qualified nurse and the eldest grandchild of my father’s late brother Abe, contacted me last year and said that she and her husband, Tom Jacobs wanted to come to Ha Moletsane to ease the water situation in the village.

“Tom designed the water project for the village. The water project has installed a new 30 000 litre reservoir, twelve 5000 litre water tanks spread throughout Ha Moletsane and new pipework (over 10km in length) to supply water to each house (approximately 150 houses).

“The Siloe borehole was cleaned and a new pump installed, powered by electricity. The existing two Siloe reservoirs have been repaired and refurbished. The Siloe pipe system has been repaired, new pipes laid and 28 taps repaired/installed throughout the village. Ha Moletsane’s water supply is supplemented with water from the repaired Siloe Borehole, and will be replacing the pump at Siloe, as well as repair the pipeline to Ha Moletsane,” Mr Bothma said.

LSP Construction designed and constructed the power line to Ha Moletsane and electrified the clinic and the surrounding houses where the line passes through.

For her part, Mary Moleko nee Makhamathoane Malie, who donated the property that was been converted into the clinic, said the smiles on the faces and the ululations the community made told of the importance of the clinic.

“I am happy to see that the community recognises this gesture for what it really is, since they have not had health facilities for many years in their midst. I am therefore happy to see the happiness on the faces of the community as we open this facility today,” she said